Today we celebrate the dragon-slaying Christian martyr who became the Patron Saint of England. But who was St George – and why and how did he become England’s hero?

Former primary school teacher Laura Steele, from education resource experts PlanBee, has put together this handy guide – and a free St George’s Day Activities Pack for children – to tell you all you need to know. 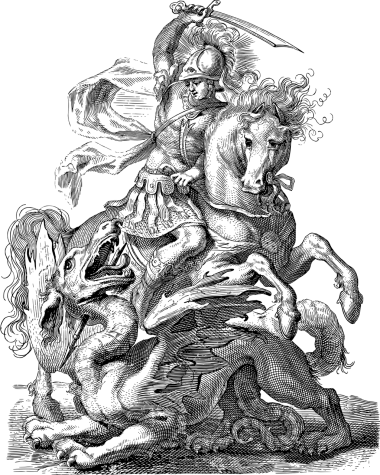 Who was St. George?

We actually know very little about the life of St. George. However, we do know that he wasn’t actually English – he was born in what is now modern-day Turkey, in approximately AD 280.

He was raised as a Christian, and joined the Roman Army as a young man.

He was tortured and then killed by the Emperor Diocletian, for refusing to renounce his Christian faith. In death, he became a martyr (someone who chooses to sacrifice their life or face pain and suffering instead of giving up something they hold sacred).

What is St. George’s connection to England?

St. George’s emblem was a red cross on a white background. Legend has it that during the First Crusade to Jerusalem in 1098, St. George appeared as a vision to lead the Christian knights during a siege.

(The Crusades were a series of religious wars, fought to gain or maintain control over Jerusalem and other Holy places.)

About 100 years later, King Richard III fashioned his army’s uniform on the cross of St. George. Many soldiers often turned to St. George for protection.

How did St. George become the patron saint of England?

St. George was canonised (declared a saint) in AD 494 by Pope Gelasius. However, it was not until 1350 that St. George became the patron saint of England.

A patron saint is the protecting or guiding saint of a particular person or place. King Edward III, who was the reigning monarch in England at that time, chose St George as the country’s patron saint as he was admired by many for his bravery in the face of terrible suffering.

King Edward also created the Order of the Garter at this time, which to this day is the highest order of chivalry. The badge representing the order shows St. George on horseback, slaying  a dragon.

What is the legend of St. George and the dragon?

This is the story that is most famously associated with St. George. There are many different versions of this tale – here is one:

A knight named Sir George was travelling the land and came across a town that was being terrorised by a dragon. The inhabitants told him that a young maiden had to be sacrificed to the dragon every day, or the beast would destroy the entire town.

Each day, the next poor girl was chosen by a lottery. That very morning, the King’s own daughter’s name had been called. On hearing this, Sir George vowed to save the princess and slay the dragon. He found the beast in his lair, and threw his spear at him. However, the dragon’s scales were so hard that they shattered the spear. Undeterred, Sir George unsheathed his sword and charged at the dragon, driving his weapon into the soft underbelly of the beast, killing him dead. Sir George took the princess back to the King, and the town celebrated.

This story did not appear in popular culture until around 500 years after St. George’s death. Many historians believe it was developed and embellished in the Middle Ages when a collection of stories about various saints’ lives was written.

Regardless of whether the tale is true or not, due to this legend, as well as the manner of his death, St. George is a symbol of courage in the face of adversity, as well as the English ideals of honour, bravery and gallantry. 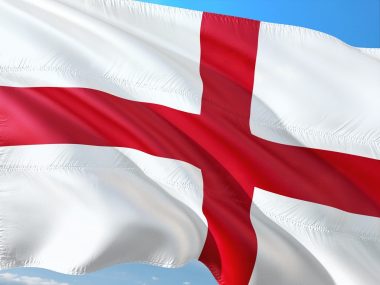 How did the English flag come to be?

The flag of England is derived from Saint George’s Cross, which is a red cross on a white background.

It has been associated as an emblem of England since the Late Middle Ages, and was used alongside the Royal Banner in Tudor times, in particular as a maritime flag (used on boats and ships).

Today, the English flag is widely used at sporting events as a way of supporting English teams and participants.

How do we celebrate St. George’s Day?

St. George’s Day has been observed in England since the early 15th century, and at that time was seen as important a date as Christmas. Whilst it has lessened in significance today, it is still celebrated by many, with activities such as traditional Morris dancing, Punch and Judy shows, wearing a rose, flying the English flag, and singing the hymn ‘Jerusalem’. The day is seen as an expression of English culture and identity.

St. George is also the patron saint of scouting. He was chosen as the qualities of St. George reflect those desirable in a scout: responsible, truthful, devoted to duty, brave, noble and dedicated to helping others. Every St. George’s day, Scouts remind themselves of their Promise and Scout Law.

St. George had some competition –  Edmund the Martyr, Edward the Confessor, and Gregory the Great were all contenders for becoming the country’s patron saint.

If you are a teacher or parent looking for some FREE St. George’s Day resources, check out PlanBee’s free St. George’s Day Activity Pack, which includes the story of St. George and the Dragon, a word search, some diary templates, colouring pages, and a template for making a dragon.