SINCE the amateur rights for ‘Spamalot’ were released three years ago it seems every musical theatre company in the land has staged a production – you could probably go somewhere in England every week and catch it.

Most of these companies rehearse for and perform one show a year. The big ones have deep pockets to hire in the huge sets and boxes and boxes of costumes necessary to stage this colossus. 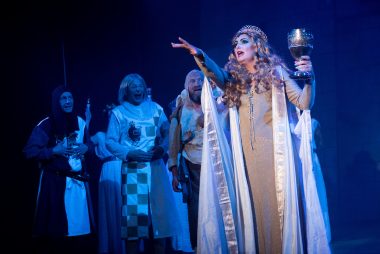 Why then should the Crescent, which only includes one musical a year in an already robustly challenging main house season decide to a show that not only has the potential to decimate the coffers but also leaves them vulnerable to unnecessary and unfavourable comparison?  After all, with the triumphs of niche shows like ‘Urinetown’ and ‘Parade’ they’ve a built a reputation for ‘…and now for something completely different’ – how Pythonesque!

These were the thoughts in my head before attending the Crescent’s opening night. Well – ‘hush my lips’ how wrong could I be?

No they don’t have deep pockets but they do have ‘Phil the Builder’ and ‘Colin the Wizard of Design’ that’s Phil Parsons and Colin Judges, two legends who have once again done the impossible. Constructed a wall-to-wall floor-to-ceiling West End set from scratch – not a pantechnicon-delivered, well worn, only 30 careful owners, self-assembly hand-me-down but a stunning original.

“Build it and they will come” ‘twas said and they did – it was full. There was anticipation, excitement and an opening night buzz I hadn’t seen at the Crescent for quite a while. Those that came were generous and giving and there to enjoy not to critique which is my job.

Based on the 1975 British film comedy Monty Python and the Holy Grail, the show is a parody of the medieval story of King Arthur.

Joe Harper cuts a handsome figure as King Arthur and has the cappuccino-smooth vocals to match, Mark Horne makes an amusing Sir Robin, Paul Forrest cuts a noble gait as Sir Lancelot, Luke Plimmer a worthy Sir Bedevere and the ever watchable Nick Owenford tackles Sir Galahad like an amalgamation of ‘Carry On’ characters. 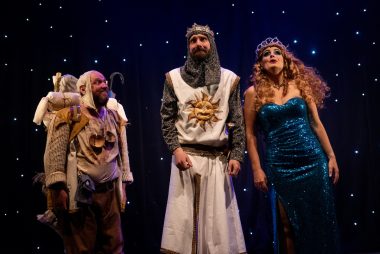 Tiffany Cawthorne is delightfully divarish as the Lady of the Lake – Dave Rodgers ‘spot on as the kind of Frenchman we love to hate, Jack Kirby brings a smile as he stilt-walks and squawks as the Head Knight of Ni, Brian Wilson offers up a rib- tickling cameo as a castle guard and my ‘best of the best’ shout out goes to Brendan Stanley as King Arthur’s sidekick lackey – ‘Patsy’ – simply masterful.

The Knights of the Round Table tap dancing routines choreographed by Colin Lang was my highlight of the show.

To reiterate, Crescent costumes don’t come in a hired in crate but many are made and adapted from the theatre’s own wardrobe. The bevy of beautiful frocks kept coming and coming, from crusaders to showgirls – sterling job from Stewart Snape’s team. 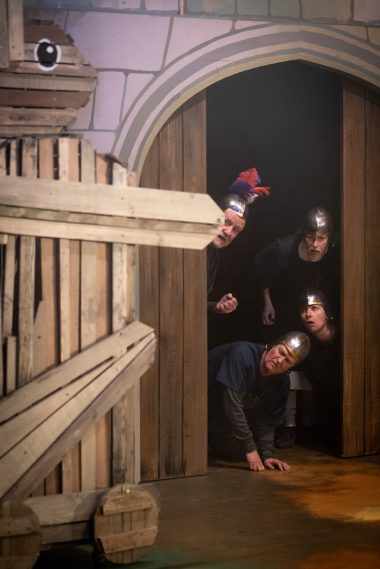 As a production what this ‘Spamalot’ lacks in originality is more than made up for in gusto. There was an infectious feeling of camaraderie, which leapt over the curtain line from ‘tabs up’ – here was ‘Sheepcote Street United’ playing out of their depth in the Premier League – there were some decidedly dodgy moments and no doubt a chaotic backstage but by George (him what slayed the dragon) the company deserve to be proud of what was achieved.

Rarely have I seen such relieved faces in a walkdown.

Directed by Keith Harris and with a band hitting all the right notes under the baton of Gary Spruce (simply ‘driven’ percussion from Matt Firkins) this glorious frolic canters to Camelot until Saturday, June 8.

Click here for more information and to book tickets.