BILL Kenwright, one of the most successful theatrical producers in the UK, has made a fortune in theatre where most ‘would-be’ impresarios fall at the first hurdle. That is of course putting ‘bums on seats’.

As PT Barnum, the greatest showman once said: “Nobody ever went broke underestimating the intelligence of the people.”

Kenwright is the man who took a play, which failed in the West End, reinvented it and turned it into the phenomenon that is Blood Brothers the musical. He also, along with his producer chum Laurie Mansfield, more or less invented the jukebox musical – that is a catalogue of  chart-topping  songs with the thinnest of scripts sandwiched in between them.

It seems Kenwright has done it again – Malvern was packed on press night for his latest touring production – an intriguing, thriller-romp entitled ‘Catch Me If You Can’. 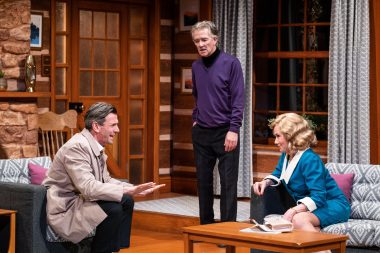 For the record, it has nothing to do with the well-known ‘Catch Me If You Can’ thriller romp Steven Spielberg film starring Leonardo DiCaprio but is a play written in the 1960s by the late Jack Weinstock and Willie Gilbert.

It is difficult to put this production into a genre – there’s nothing much here to chill-thrill, it takes liberties with credibility but is undeniably great fun from curtain up to the walkdown.

The story is set mid-60s – in a hunting lodge complete with a giant moose head above the fireplace in the Catskill Mountains, New York State. Here we meet newly wed ad-man Daniel Corban – played by silver-haired Dallas heartthrob Patrick Duffy in a brilliant piece of casting.

Duffy uses his velvet whispery voice to full effect as he drinks the state near dry with a tumbler of bourbon permanently attached to his right hand. He can of course be forgiven for his over indulgence as his wife of just a few days has gone missing.

There are blind alleys aplenty as we meet the beautiful Elizabeth who claims to be his wife– a full on feisty outing from Linda Purl, Inspector Levine – a dead-ringer for Peter Falk’s Colombo complete with raincoat contribution from Gray O’Brien – and your local neighborhood priest Father Kelleher played with a nod to the shamrock isles by Ben Nealon. 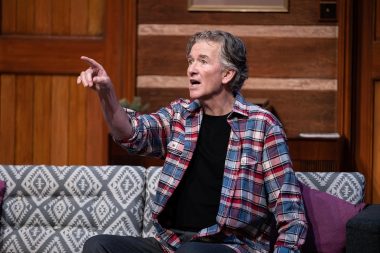 Complementary little cameos come in Act Two from Hugh Futcher as Sidney the sandwich man and Paul Lavers and Chloe Zeitounian aka ‘The Parkers’, the Lodge owners.

It is directed with pace and humour by Bob Tomson and designed with a sense of silliness by Julie Godfrey – where did she get that moose’s head?

This is not classic theatre in any sense of the word, it is formulated stuff where most of the thinking is done for you – but in fairness it is highly entertaining and well-performed. It comes with a bevy of surprises – including a dynamite final denouement which I would not dream of giving away.

‘Build it and they will come’ as another famous quote pronounces. Well, once again Kenwright, the modern day great entertainer has staged it and they are coming. A booming box office for a play is a rarity amidst a sea of musicals.

Naturally a trip down young Bobby Ewing memory lane is a major factor in pulling in the crowds, but it is a team effort that’s sending them home with a happy heart.

Catch Me If You Can runs until Saturday, March 26 – click here for times, tickets and more information.