THE SOMBRE setting by designer Lucy Sierra of austere nebulous levels of greyness greets the audience on auditorium entrance.

This is complemented by an ominous droning soundtrack from sound designer Dan Balfour. It certainly exudes an atmosphere of wanting to ‘take shelter’ rather than find a theatre seat.

An explosion of light and sound down stage left and we meet a shell-shocked young boy – Private ‘Tommo’ Peaceful. He is wrapped in a blanket, wide-awake and waiting for dawn and, we assume, his date with firing squad to be executed for cowardice.

Tommo starts his tale of how he ended up in this state of affairs. 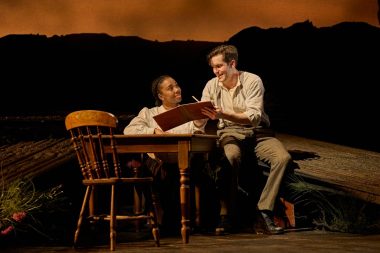 Through a clever state from lighting designer Matt Haskins, the dead greyness of the trenches turns into turn into the green fields of the Devonshire village of his childhood.

There are two more Peaceful brothers besides Tommo – Charlie and the mentally damaged Big Joe. Their father has recently died, and times are hard but family fortitude binds them together.

Tommo and Charlie fall in love with the same girl, Molly. Problematic as this is, the love the brothers have for each other is in some way made stronger.

The Great War arrives and a recruiting officer comes to the village looking for volunteers. Charlie signs up and even though he is underage Tommo follows him.

Act Two takes us into the horrors of the war, the mindless going over the top of the trenches to achieve little. Time passes- weeks into months into years – disillusion replaces patriotism. 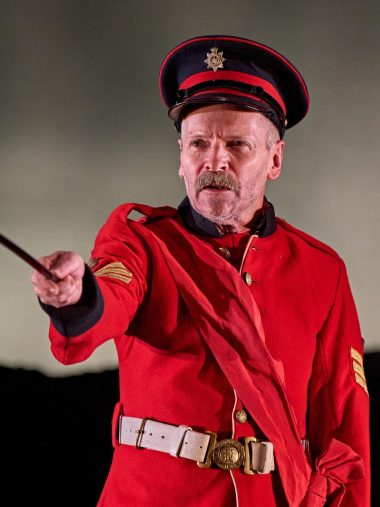 One night, Tommo is faced with a decision to go on a senseless foray or stay behind to care for Charlie who has been wounded.

He chooses his brother knowing this will be regarded as treason and death by firing squad.

The downright stupidity and futility of this war captured in Michael Morpuro’s novel is well adapted for the stage by Simon Reade.

The ensemble cast play a multitude of roles, some of which – particularly the gender blindness roles – I found confusing.

Daniel Boyd as Charlie and Daniel Rainford as Tommo were thankfully constant in character and both turned in strong performances.

Directed by the highly respected Elle While, it is a piece that requires a delicate balance to hold the concentration – sadly this didn’t always happen. Variable sound levels made the story jump in and out of context and the general pace lacked consistency.

I am sure that the performance I saw was not one of the company’s better nights and that it normally is delivered with far more gusto. Such is the stuff and the magic of live theatre.

Private Peaceful is at Malvern until Saturday, May 14. Click here for times, tickets and more information.

How to help your overstressed, disengaged or last-minute cramming teenager through exams

Queen’s Platinum Jubilee: First glimpse of setting for Party at the Palace